The elephant’s body is well adapted for the survival of rugged conditions of their habitats in Africa and Asia. Let’s take a closer look at some of the very interesting and unique parts of the anatomy of an elephant.
Trunk
One of the most interesting features of an elephant is its trunk. An elephant’s trunk is both an upper lip and an extension of the nose with two nostrils running through the whole length. An elephant uses its trunk for breathing and exploring things, to pick up and throw objects, rub an itchy eye or ear, and even as a snorkel when swimming under water. Elephants use their trunks for eating and drinking and for friendly wrestling matches with other elephants. The trunk has more than 40,000 muscles, which is a lot more than a human has in their whole body. An Asian elephant’s trunk can hold about 10 litres of water at a time. But it’s really a nose; they don’t drink from it but suck water up into their trunk and then blow it out into their mouths. An elephant’s trunk is both strong and very agile. It can perform multiple tasks from pushing over heavy trees to picking up the smallest twig. An elephant uses its trunk for a whole range of smelling tasks, as it is one of the elephant’s primary sensory organs, along with the ears. An elephant’s trunk is so important and vital to its life that it is almost impossible for the elephant to survive should it ever get severely damaged. It has been reported that an elephant can smell water several miles away! Key to this ability are the millions of receptor cells housed in the animal’s upper nasal cavity.
Tusks
Tusks are continuously growing front teeth, which grow throughout most of the elephant’s life. With African elephants, both males and females always have tusks. Asian females never have big tusks, but sometimes grow little ones, called tushes. Most male Asian elephants do have tusks, but some have none. Elephants use their tusks for digging, ripping bark of trees, foraging, carrying heavy objects and for resting their trunk. They will also use them as weapons should they ever encounter conflict. Tusks are an age indicator – much like the elephant’s feet, the age of the elephant can be estimated by observing their tusks. About a third of the length of the tusk lies hidden inside the elephant’s skull which is why ivory hunters kill the elephant instead of just cutting off the tusks. Elephants are either ‘left-tusked’ or ‘right-tusked’, just like a human being might be ‘left-handed’ or ‘right-handed’. The favoured tusk is usually shorter than the other due to constant use. Tusks in a baby elephant (calf) are present at birth and are like milk teeth. They measure only about 5 centimetres long. These ‘milk tusks’ will fall out around their first birthday. The permanent tusks will then start to protrude beyond their lips at around 2 – 3 years old and will continue to grow throughout their lives. Elephants have six sets of cheek teeth (molars and premolars) throughout their lives. At birth there are two or three pairs of cheek teeth in each jaw and new teeth develop from behind and slowly move forward as worn teeth fragment in front and either fall out or are swallowed and excreted. Each new set is successively longer, wider, and heavier. The last molars can measure nearly 40 cm long and weigh more than 5 kg. Only the last four molars remain after about 60 years of age and tooth loss is often the cause of death due to starvation. 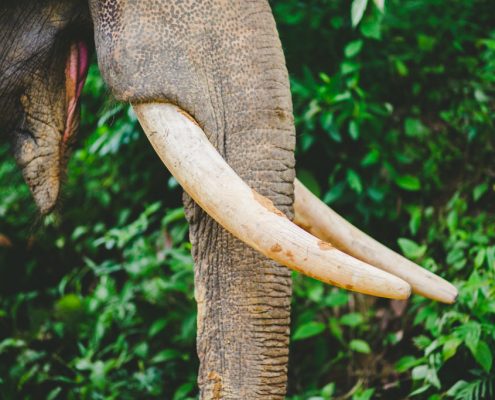 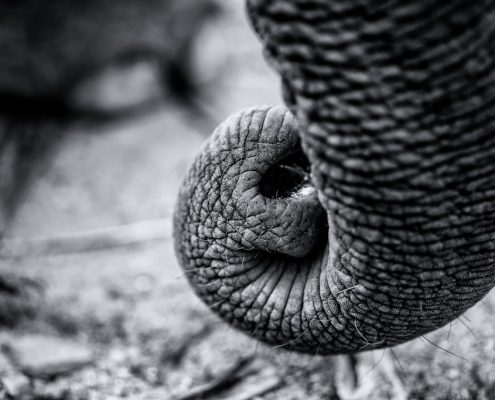 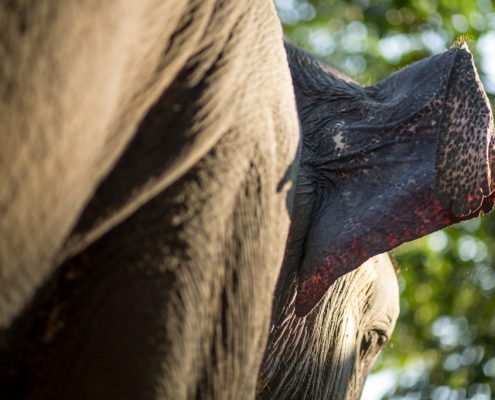 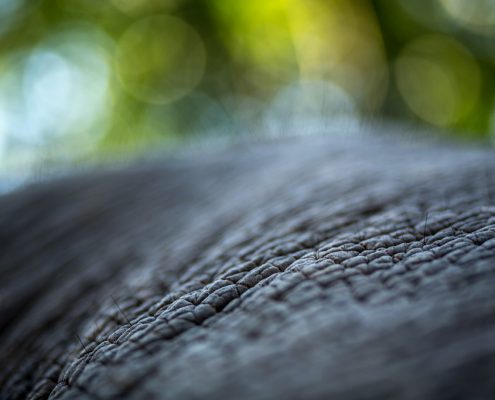 Ears
Each elephant’s ear is unique and different to any other elephant’s ear. They are used just like fingerprints on a human as a type of identification. When a threat is perceived, the ears are spread wide on each side of the head, which produces a huge frontal area. Because elephants have very few sweat glands  they flap their ears as one means to help cool down the surface of their body.
Skin
Elephants spend a lot of time in the water and mud – another very important and enjoyable way to keep cool. Normally the skin is covered with dust, soil or mud to prevent insect bites, ultraviolet radiation damage and moisture loss. The skin of the elephant is not equal at all locations of the body. The thin skin is 1.8 millimetres deep, found in the ear, around the mouth and anus. The thicker skin is found on the head, back and buttock and can be 2.5-3.5 centimetres or more thick. The skin is a highly sensitive organ with a rich nerve supply. Asian elephants have pretty patches of pink skin representing localized areas of depigmentation on their forehead, neck, ears and forelimbs.
Intelligence
Asian elephants are highly intelligent and self-aware. They have a very large and highly convoluted neocortex, a trait also shared by humans, apes and certain dolphin species. Elephants have a greater volume of cerebral cortex available for cognitive processing than all other existing land animals, and extensive studies place elephants in the category of great apes in terms of cognitive abilities for tool use and tool making. They exhibit a wide variety of behaviours, including those associated with grief, learning, non-maternal infant care, mimicry, play, altruism, use of tools, compassion, self-awareness, memory, and language. Elephants use infrasound (inaudible to humans), to communicate over long- distances. The sound waves that they produce travel through solid ground and are sensed by other herds using their feet – herds may be separated by hundreds of kilometres. These calls may be used to coordinate the movement of herds and allow mating elephants to find each other.