An elephant never forgets…and neither do we!

There are many more animals besides elephants that have Phang Nga Elephant Park as their home. The wildlife that live in the surrounding jungle environment come in all shapes and sizes and span right across the animal kingdom. Many are stunningly beautiful – just look above at the Asiatic rhinoceros beetle (Oryctes rhinoceros). The jungle has to be one of the richest and most divers ecosystems on the planet. Each creature has its own role to play. As each has evolved it has become very well adapted to use every part of their habitat so that they can thrive co-existing with other animals in a symbiotic relationship, or close and long-term biological interaction.

It’s been an exciting part of my experience while volunteering at Phang Nga Elephant Park getting to know some of the wildlife with which I share my new home. I have learned a lot from the Thai 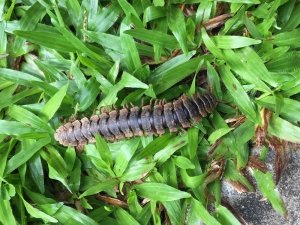 people about which animals are harmless and which can be harmful.  Although I know a little about the animal kingdom, I soon learned that if the local people avoid something then its probably a good idea to follow their lead!  A general rule seems to be to avoid anything that slithers….

The creature that causes the most concern is a relatively small invertebrate known as the Vietnamese centipede or Chinese red head centipede (Scolopendra subspinipes), shown above right.  This species of centipede can reach up to 10 inches in length and can sometimes be a bit aggressive. If you are unlucky enough to be bitten by one of them, it is going to be painful!  It is one animal that the kwan-changs always avoid – and they should know.

There are many different beetle species living at the Park, many with a protective armour casing, like that on the Asiatic rhinoceros beetle. The extraordinary trilobite beetle (Platerodrilus ruficollis) shown 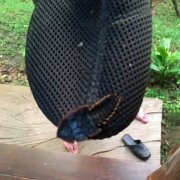 on the left, also has armour and this one  was found hitching a ride on my shoe after a recent downpour! These bizarre beetles belong to the family group Lycidae and have dramatic sexual dimorphism (which means the male looks nothing like the female); in fact the trilobite male looks like a small black-winged beetle very different from the spectacular horned female and about a tenth of her size. They get their name from trilobites, which are extinct creepy-crawly, armoured sea creatures that are often seen in fossils. 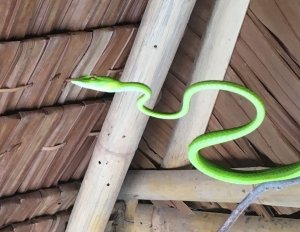 This Asian vine snake (right) Ahaetulla prasina was found on the porch of one of our Volunteer’s huts where it was poised in this amazing position supporting its body like a magician’s illusion ready to lunge at a unsuspecting huntsman spider that was nearby minding its own businesses. A beautiful colour, it is not considered harmful to humans. The wildlife at the Park demonstrates the circle of life to you on a daily basis. This snake was demonstrating the predator behaviour, but it also needs protection, as it too can become prey. So it uses its amazing ability to camouflage itself in its surroundings using what is called counter shading. This means when a predator looks from above the snake blends perfectly with the trees around it, but if the predator is looking upwards then its lighter underside camouflages with the sky. Species spotting at a glance in the jungle is near impossible with these incredibly adapted creatures! 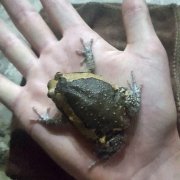 There is a constant symphony that makes up the jungle soundtrack. With all the birds, insects and amphibians there is a lot of noise. By far the loudest of all the creatures in their jungle home is in fact an insect, the Cicadas (Cicadoidea). They do however have some serious competition when it is mating time for the male banded Bull frog  (Kaloula pulchra), shown left, as their call is almost as impressively noisy. At certain times of year, we recommend our Volunteers bring earplugs! 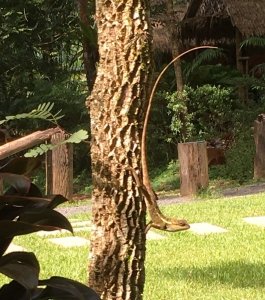 This little guy (right) is the Oriental garden lizard (Calotes versicolor). These lizards are found all around Thailand. Variations in their colour are frequent but as seen in the image the one spotted at the Park blends in perfectly on the tree. Even though these lizards can be found each day, you have to look very closely once it is in a branch where it will lie dead still in wait for unsuspecting prey to cross its path.

The last animal I want to mention is one that I have not yet managed to get an image of due to their shy and nocturnal behaviour. So the photo shown is 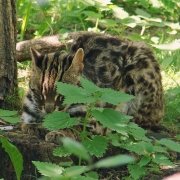 from Wikipedia (by Abujoy – Own work, CC BY-SA 3.0, https://commons.wikimedia.org/w/index.php?curid=11936469). This is the Leopard cat (Prionaliurus bengalensis), which I think are truly miniatures of their namesakes. As a species they are not endangered (in fact they are in the category ‘of least concern’ even though they are at risk of habitat loss). The population of leopard cats around the Park is clearly doing well as one cat I saw recently had a kitten with it.

This believe it or not is only an extremely small sample of the wildlife that graces us with its presence here at Phang Nga Elephant Park. There is enough to write a single blog about each species! If you love wildlife, you will be in heaven here. Fingers crossed this short blog has got you as excited about the local wildlife here as I am.